Elegant People: A History of the Band Weather Report 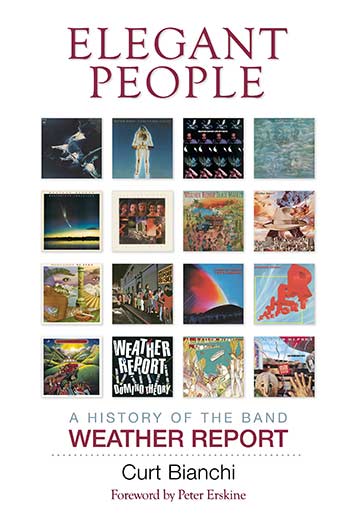 I am pleased to announce the publication of my new book, Elegant People: A History of the Band Weather Report. It is available now at Amazon and book sellers everywhere. It may even be in stock at your local brick-and-mortar bookstore. If not, they can order it. (You can also order it directly from the publisher here.)

“Really, an amazing book. Many thanks. Wow… a great work, thank you.”
—Peter Erskine, author of No Beethoven: An Autobiography and Chronicle of Weather Report

“Many congratulations on producing a highly readable, superb work on the band. This has clearly been a labor of love.”
—George Cole, author of The Last Miles

“Elegant People manages the impressive feat of being both exhaustive and hugely entertaining. I’m amazed at the stories and details I’ve gleaned as I’ve read this phenomenal effort. I’m certain you’ll be just as impressed.”
—Anil Prasad, founder of Innerviews: Music Without Borders

“I loved every bit of it.”
—Rick Mattingly, writer, editor, teacher, and drummer/percussionist.

“Curt Bianchi is not a newcomer to his topic. He has spent most of his life as a fan of the group and has created the well-respected website Weather Report: The Annotated Discography. A depth of knowledge that comes from long-term research, and the author’s passion for the music, is evident on every page. Read this book and rediscover the music.”

—Tom Wilmeth, Something Else!

“Like all the best musical biograpjies, Elegant People has you reaching for the albums, reframing their content and context as you read and listen. Especially interesting is the trenchant resistance to the group by the jazz police; Weather Report only made it into the jazz category of the Grammys in 1980. From the ambitious, impressionisitic tone poems of their early years, through to the showbiz swagger of the Jaco years and beyond, Bianchi, while refraining freom partisan judgement, offers clear perspectives and coherent assessments of a legendary musical institution and their remarkable legacy.”

“Elegant People is surely the ultimate Weather Report book – it’s an absolute must for fans and those wanting a deeper dive into the band’s music.”

“Weather Report are undoubtedly one of the most important and influential jazz bands of the modern era, and author Curt Bianchi has consulted a vast range of primary and secondary sources to tell the extraordinary story of this phenomenal band. Among the 80-plus interviewees are the three founding members: Joe Zawinul; saxophonist Wayne Shorter and basist Miroslav Vitous, as well as band members, session musicians, managers, recording engineers, artists who worked on album covers, and road crew, including their long-serving sound technician Brian Risner, known as the ‘Chief Meteorologist.'”

“Weather Report fans will surely lap up a book that spares no detail. Rich in anecdotes and first-hand accounts, Elegant People… captures the energy and questing spirit of a unique band, steered by Zawinul and Shorter, whose ripples are still being felt all these years later.”

—Ian Patterson, All About Jazz

Praise From Readers of Elegant People

“I just received my copy. What a beautiful, beautiful book! Thank you for efforts, Curt Bianchi in writing such a great history of such a great band. An absolute must for all W.R. and Fusion fans!”
—L.H.

“Just got done with the book. Curt Bianchi, you have done an astounding job here, with a level of research and a collection of interviews that probably surpasses any music book that I have seen. Well done.”
–J.G.

“OMG!!! You hit this out of the park!!! As a huge fan of Weather Report and Joe Zawinul, this book delivers on all accounts! I have not been able to put it down! Your writing style is also superb. What a treasure and gift you have given all of us.”
—R.C.

“This is an INDISPENSABLE book for Weather Report fans. Comprehensive in its scope and granular in its detail. Simply a superb work.”
—Craig, goodreads.com

“I just finished your Weather Report biography, nearly impossible to stop reading 🙂 Such a treasure—so well written and informative! Easily one of the best music/jazz bios I’ve read!”
—H.B.

“Thank you so much for this book, a book that I’ve been waiting for since first seeing Weather Report in 1977. You have produced, I think, a book that can be considered by fans to be the WR Bible and you are to be commended.”
—P.L.

“The Elegant People book is EXCELLENT. I purchased it about a month ago and have thoroughly enjoyed it, slowly digesting each chapter. I am a big WR (and JZ) fan but I learned a lot, not just about the various band but also the construction of the music itself. I found myself listening to each album (twice) as I was reading the various chapters of the book. What FANtastic fun! You’ve gone from super-fan to super-author. Well written and well done. No doubt a labor of love was prominent.”
—T.P.

” I’m a fan of all things Weather Report, and now I’m a fan of your book Elegant People. It’s a wonderful read. I always had that sense that you had sat down to tell me this amazing story. Brian Risner and I have talked about his experiences many times but the book was a very comprehensive, unbiased look at the players and the total impact Joe, Wayne and Weather Report had on music. For all their foibles they gave the world some of the best music ever. Their legacy endures.”
—V.I.

“I recently got your book Elegant People, having been a Weather Report fan for years. I saw them live three times in Manchester (UK). I started with Black Market and stayed the course until Night Passage, and I’m now checking out the earlier and later albums, as I read through the book, which is a masterpiece. What a huge piece of work. Great job, well done!!”
—D.

“This is probably the most thorough statement on the band Weather Report that will ever be written. . . . Curt Bianchi has done us fans and music history a real service in beautifully documenting this legendary (and hopefully not forgotten) band.”
—R.H.

“To make it short: I would like to sum up my reading experience by rephrasing a Woody Allen movie title: ‘Everything you always wanted to know about Weather Report but did not know whom to ask…’ Extremely well researched and documented, fluidly written and including rare pictures, this book sets a standard that will be hard to surpass! This is just the kind of book I have been waiting for.”
—M.J.

“Got my copy, can’t put it down! I had the privilege of knowing Joe for twenty years and heard lots of stories, but there is so much here that I never knew.”
—J.G.

“Ordered it. Read it. Loved it. Thanks for writing this, Curt. It does great service to the music and humanizes the band members.”
—J.S.

“I can highly recommend this book—it is a serious amount of reserch work that underlies this amazing book! It’s one of a few books I surely will read multiple times.”
—C.R.

“I just got hold of your wonderful book and started reading it—it is BRILLIANT!”
—N.A.

“What a terrific book! Thank you Curt Bianchi.”
—C.A. 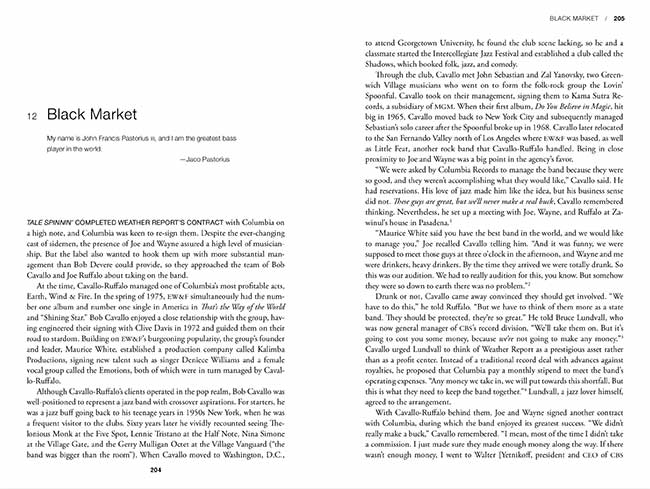