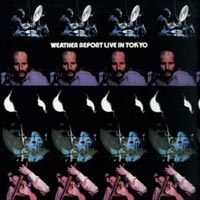 In January 1972 Weather Report played five sold out concerts in Japan. The January 13 performance at the Shibuya Philharmonic Hall in Tokyo was recorded by Columbia, from which came the tracks on the second side of I Sing the Body Electric. Live in Tokyo presents the entire evening’s performance, capturing the “sheer power the group could generate in performance,” as Zawinul biographer Brian Glasser put it. “While side two of I Sing the Body Electric gives us heavily edited glimpses of Weather Report as heard live in Tokyo, this two-disc Japanese import contains entire group ensembles from that concert–and as such, it is a revelation.” He goes on to say, “This would be the radical apogee of Weather Report on records, though they could retain this level of fire in concert for years to come.” [IASW, pp. 143-144]

Part of the fire seemed to come from the Japanese people themselves. “When we went to Japan,” Zawinul recalled, “we didn’t know what kind of a response we would get, but I couldn’t believe what happened. We thought, ‘What are we gonna do with these Japanese people, man?’ They’re so beautiful, such wonderful listeners, but laid back. That was their culture. So we said, ‘Let’s hit ’em hard, right from the first note,’ and we hit ’em hard! We improvised, because the tunes we had written at that time were not very long–eight bars here, a nice little melody, and so on–but we worked it over, and sometimes we’d play it long, sometimes short. It was an inspirational way of doing things, and through that slowly we developed into a band.” [IASW, p. 144]

In a 1977 article, journalist Sy Johnson recalled his impressions of a Weather Report concert from this period. “[Weather Report’s first album] was an intriguing but introspective affair that puzzled many and won over few. I heard the band in a coffee house in the Village shortly after that first Columbia record, and the vagueness had disappeared. A hard-driving confidence was radiating from the bandstand. Eric Grávátt was on drums and moving the group with rare musicality. Dom Um Romão had taken Airto’s place on percussion… [This band] was everything we could have imagined, and more.” [Jazz77]

In a 1972 article, Zawinul talked about the band’s live performances: “Right from the start, [playing together] was just a very natural thing. But I can’t really talk about the music. None of us can. We don’t know what’s happening. We have our tunes and lines, which we always play differently. What’s happening up there is just composing, and when it’s right, it’s magic. There’s a certain chemistry in the band which amazes me–and which makes it very consistent, also.” [MM72]

He offered these words of advice to those planning to attend a Weather Report concert: “Don’t go expecting anything–just let it come to you. That’s the only way I can say it. At the moment, if you expect anything from anyone then you’re likely to get a great shock! That’s all.” [MM72]

Zawinul told Ray Townley of Down Beat: “[In 1967] I had spent a winter with my family in Austria, and I wrote about ten tunes, including ‘In A Silent Way,’ ‘Directions,’ which Miles [Davis] used to play for a long time as an opener for his show, ‘Early Man,’ and ‘Orange Lady,’ which by the way is 14 minutes of ‘Great Expectations’ on the [Davis] Big Fun album. But there was some kind of mess-up with the titles, so it was not mentioned that it was my tune. Also ‘Pharoah’s Dance,’ ‘Double Image,’ and a couple of other things. I wrote them all in this period during 1967.” [DB75a]

In fact, “Great Expectations” (a Davis composition) and “Orange Lady” were originally issued on Big Fun as one track called “Great Expectations,” and begins at 13:37 of the combined track. The two tracks were separated and given their respective titles on Davis’ The Complete Bitches Brew Sessions (August 1969-February 1970). [MB]

“Eurydice” comes from Weather Report’s first album, while a studio version of “The Moors,” with Ralph Towner on guitar, appears on I Sing The Body Electric.

Studio versions of both “Tears” and “Umbrellas” were recorded on Weather Report’s first album.

2 thoughts on “Live In Tokyo”