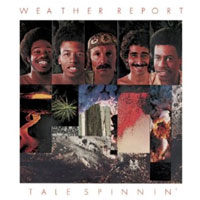 “Our music is the reflection of the state where you arrive as a human being.”
– Joe Zawinul

“Dedicated to the living.”

Josef Zawinul once said “The bass is the mother of all music and the drums are the father.” [IASW, p. 215] Since Alphonso Johnson’s recruitment for Mysterious Traveller, the “mother” had been in good hands. But the “father” remained problematic going back to the Sweetnighter days when Eric Gravatt was phased out. At least eight drummers had passed through the band by the time Ray Townley interviewed Zawinul for Down Beat in the late autumn of 1974. Townley asked him why he had changed drummers so often.

Why do you think?

We are auditioning drummers now. We have tried to audition drummers in all kinds of environments, in homes, in rehearsal studios, but the only way you really find out is on the stage. And there is no question about the difficulty of playing drums, period. And to play drums with a band that is 80% improvising is the most difficult. And we have not found the one yet. Everyone we’ve had, so far, has had something special, which was very beautiful. But there’s so much more to it.

It looks like you’re looking for a drummer whose beat is more pronounced?

Yes, but not in a rhythm and blues or rock and roll sense. STRENGTH can be expressed in many more subtle ways than that.” [DB75a]

Zawinul added this perspective in 1976: “The fact that we change the rhythm section often does not mean we have problems with them. We are moving, we are in the world, we are not standing still. Wayne and me, we’ve been together for many years, and friends for 17 years, and have had similar ideas about how things should be, and that’s our privilege. We change as many times as we feel like changing, but today is another day. Sometimes the rhythm section are not able to execute new ideas or sometimes unwilling to accept new things.” [BE76]

In 1984 Zawinul recalled the situation, saying that Mysterious Traveller “was so good that we couldn’t follow it up with a live band. Even though we had Alphonso Johnson in the band, we couldn’t find the right drummer to play all these different things. After Eric Gravatt we had Greg Errico, who used to play for Sly And The Family Stone. He’s a world-class rhythm and blues and rock drummer, but he could not play any jazz. That limited us, so after Mysterious Traveller we had to make another change. We got Ishmael Wilburn, who was already on the record, to go on tour with us. He was great when he just played, but when we were all of a sudden out there in the world and everybody was coming to see us, somehow he couldn’t do it–he lost heart. So we needed another drummer. We actually had two drummers on the bandstand: Ishmael Wilburn and Daryl Brown. Dom Um Romao was also up there playing percussion. Al Johnson brought Daryl in from Philly; he was an excellent, but light, drummer. That was the band’s hardest time as far as live performance was concerned. The music was so demanding; ‘Nubian Sundance’ is one of the hardest and longest of our pieces to play, but we did it well. Dom Um was a great help for the band. After he left, we had another Brazilian percussionist, Alyrio Lima.” [KB84]

By the time of Tale Spinnin’, “we didn’t have a band and we had to make a record,” Zawinul remembered, “and we tried to get a band together, and we rehearsed all the music with the drummer.” [BE76] Zawinul apparently wasn’t satisfied with the tracks, and a chance encounter led to Ndugu Leon Chancler’s participation. “That was a fluke situation,” Chancler recalled in 2001. “I was still with Santana at the time, but we were on hiatus. I was in the studio with Jean Luc Ponty and Weather Report was rehearsing and recording next door. As I was walking out they asked if I would like to come to do a session for them, and that lasted for a week. Those recordings turned into Tale Spinnin’.” [SI01]

At age 23, Ndugu had already recorded Herbie Hancock’s Mwandishi, toured with Miles Davis, and was then Santana’s drummer. “I like the way he played,” Zawinul recalled. “I heard him with Carlos Santana, and I wanted him on that next record, Tale Spinnin’,” adding, “I liked his rhythm feel and his touch on the drums.” [IASW, p. 168] Zawinul tried hard to get Ndugu to join the band after recording Tale Spinnin’, but the drummer elected to remain with Santana. [IASW, p. 174-175]

In his Zawinul biography In A Silent Way, Glasser remarked that “Zawinul’s approach to the recording model that he’d learned from Miles [Davis] on Bitches Brew came closer on this record than on any other.” [IASW, p. 170] Townley asked Zawinul if his experiences with Miles Davis helped get his ideas together for Weather Report. “Not from the music, but from the way Miles handled a recording session I learned a whole lot. They had the tapes running constantly, not to lose certain things. The best things are usually happening when you just get together and try this shit, you know. Miles is a leader, but in such a relaxed way that you never feel like someone is trying to tell you something. There was very little talking going on. It was more just a vibe.” [DB75a]

According to Alphonso Johnson and Ndugu, that was much the style of the Tale Spinnin’ sessions. Johnson told Glasser, “There was a lot of freedom in how it was put together. That was part of what made the music so special. It was very reminiscent of how I imagine Miles used to record. They would just start rolling tape and the song would start immediately from the first note. Then later Joe and Wayne would go back and splice the tape. So what may have been the middle of what we did would all of a sudden become the introduction, so it would start at a high point.” [IASW, p. 170] Ndugu concurred, telling Glasser, “There wasn’t a lot of dialog about what they were trying to do musically. We would go in and just start playing, and they would roll the tape, or they would give me a sketch of a tune, which would be eight bars or something.” [IASW, p. 170]

On the original LP inner sleeve, Zawinul explained the background behind this composition:

I was in St. John in the Virgin Islands on the Fourth of July and there was this incredible old man, black and old, the blackest eyes you ever saw. Now everybody was dancing and nobody paid any attention to him; he was wearing a long green shirt. The music was unbelievable–they had the St. Thomas Steel Band, the original one, the best in the world. The man in the green shirt was there, out there dancing by himself, and I’ve never seen anyone dance like this incredible old black man in my life. It was his age, his maturity, his wisdom.

In 1976, Jurg Solothurnmann of Jazz Forum magazine asked Zawinul to describe his role as “orchestrator,” as he was credited on Tale Spinnin’. “What’s happening exactly when someone brings in a piece?” he asked Zawinul. “Let’s take Wayne Shorter’s ‘Lusitanos.’ How do you proceed?”

“We start playing the piece exactly the way it’s written,” replied Zawinul. “In ‘Lusitanos,’ all the chords and the melody are by Wayne. But I improvised the little melodies on top of it as you can find them also on Mysterious Traveller. After all, I don’t write anything down. Later, after the recording of the main tape, I go back to the studio–mostly without Wayne–let the tape run and orchestrate, improvise, on top of it. That’s my way of ‘orchestration.’ You know, from all we record we get tape cassettes. I take them home, listen to them again and again, think about it and begin to hear many things that would go along with it, melodies and sound that would get different vibrations of it.” [JF76]

Conrad Silvert wrote, “Zawinul writes extremely complex charts, with melodies, variations, unexpected bridges–the element of surprise is paramount. And yet nearly every song has at least one or two amazingly catchy motifs, which seem to continually dive and resurface later on, in different clothes. Two examples are ‘Between The Thighs’ from Tale Spinnin’ and the title track of Black Market.” [DB78b] Ndugu told Glasser, “On ‘Between The Thighs,’ I’d say 90 per cent of it was done live, as opposed to layering. Joe didn’t change anything that was already there; he just enhanced or embellished.” [IASW, p. 171]

In a 1978 interview, Zawinul told Michael Zipkin, “I wrote this tune in 1956. You see, I had this girlfriend in Cairo, and her name was Badia. She was a night club dancer.” [BAM78] Ndugu told Brian Glasser, “When we did that cut ‘Badia,’ he sang this one little thing to us, and that was the whole approach to the whole song. He played on the piano [the ascending two- and three-note motif], and then he started singing [the descending Japanese-sounding vocal figure], and that was it! From that little, haunting melody that song evolved.” [IASW, p. 171]

“Badia” became a concert staple for Weather Report, paired with “Boogie Woogie Waltz” from Sweetnighter, as can be heard on the album 8:30. Zawinul continued to perform it with his post-Weather Report band, the Zawinul Syndicate.

This live version of “Man In The Green Shirt” was recorded November 27, 1975 at the New Victoria Theatre, London. It was originally released in 2002 on Live and Unreleased, and is included on the version of Tale Spinnin’ that was released in 2012 as part of the boxed set Weather Report The Columbia Albums 1971-1975.

This medley of the Zawinul compositions “Directions” and “Dr. Honoris Causa” was recorded November 27, 1975 at the New Victoria Theatre, London. It was originally released in 2002 on Live and Unreleased, and is included on the version of Tale Spinnin’ that was released in 2012 as part of the boxed set Weather Report The Columbia Albums 1971-1975.

“Tale Spinnin’ sets up a hypnotic groove, loose and funky with more than a touch of Afro-Latin in the rhythm section and engaging melodic detail on top. The compressed lyric intensity and experiments in acoustic/electric orchestration which lent Weather Report’s recent Mysterious Traveller its intriguing surface and structural intricacy are largely missing, and only Josef Zawinul’s “Man in the Green Shirt” and “Five Short Stories” have themes which leave lasting impressions… Despite its relative lightness, Spinnin’ convinces once again that Weather Report is the most adventurous, meticulous and consistently stimulating band working in the electric-jazz idiom.”

“After several years of experimentation–both successful and unsuccessful–Weather Report has arrived, so to speak, at the crossroads of space conceptualization, a magical point at which all the musicians seem to feel each other without effort. The result is this brilliant album, Tale Spinnin’, a mixture of folk song and sophisticated jazz in a charming, unpretentious synthesis… Most of the compositions, even those written by Zawinul, bear the unmistakable stamp of Shorter’s thinking. Like Shorter’s recent solo release, Native Dancer, the melody lines are crystal clear and seem to be suspended over a canyon of flowing rhythms… I highly recommend this LP, especially to those who haven’t listened to Weather Report lately. My imagination has been captured, and that doesn’t happen often.”

“Although it tales off slightly towards the end of the second side, Tale Spinnin’ contains some of the greatest Weather Report material ever produced, which is all the more treasurable for being in a style that the group was never to revisit. Inexplicably, it has tended to be passed over in historical overviews, perhaps because it was sandwiched between the particularly famous Mysterious Traveller and Black Market.”

Jazz Album of the Year, 40th Down Beat Readers Poll

Jazz Group of the Year, 40th Down Beat Readers Poll