In a Facebook post today, Chick Corea’s family announced that he died on Tuesday, February 9. The news came as a shock. His death was due to rare form of cancer which was only discovered very recently. He was 79 years old.

Corea enjoyed one of the most distinguished careers in jazz. As Ted Panken wrote for his Downbeat obituary of Corea:

It’s quite possible that no jazz musician ever conceived, composed and/or performed with more top-notch bands than pianist-keyboardist-composer Armando Anthony “Chick” Corea, who was born on June 12, 1941. An NEA Jazz Master who won 23 Grammy awards, and a treasure trove of Downbeat Readers and Critics poll honors, Corea’s conception of jazz was, as he told Downbeat in 2017, “a spirit of creativity.” He continued: “Great art is made when the artist is free to try whatever techniques he wants, and combine things any way he wants. That makes life interesting and a joy. I try to live that way as best I can. I don’t always succeed. I would like others to acknowledge my freedom to be myself and try new things any time I want to, and I try to treat other people that way.”

Chick Corea was one of the musicians I gravitated to when I was a teenager. Among the first LPs I bought was Return to Forever’s Where Have I Known You Before, which was released in 1974. And one of the first concerts I attended was Return to Forever’s performance at the Dorothy Chandler Pavilion in Los Angeles for the Romantic Warrior tour. That show left an impression, that’s for sure. This was the classic RTF lineup, with Lenny White, Al Di Meola and Stanley Clarke, at the height of its powers and popularity. I remember walking out of the hall in awe, asking my music teacher, “Do you think they are the best musicians on their instruments?!” My teacher offered me a gentle response. “They are some of the best, yes.”

In 1981 I had the pleasure of sitting right next to Chick when he performed a benefit show at Pasquale’s, a tiny jazz club in Malibu. I could have reached over and touched the piano keys. That was a cool vantage point to watch a master at work. A few years later I saw Chick’s band at Disneyland, where I sat in the front row of a sparsely attended theater. (I wonder if he got annoyed with me taking photos during the show. I wish I could find those slides now!) There were other shows—the duets with Herbie Hancock and the first RTF reunion tour, among others—but the Dorothy Chandler performance stands out as one of the best concerts I’ve ever seen by any band.

Although he was several years younger than Joe and Wayne, Chick came up in much the same musical environment. Around 1968 Chick replaced Herbie Hancock in Miles Davis’s band, joining Wayne on the bandstand. It was a time of experimentation for Davis, leading to the albums In a Silent Way and Bitches Brew, which are largely credited with launching the jazz-rock movement of the 1970s. Along with Corea and Wayne, Zawinul was a major contributor to those albums, too, composing “In a Silent Way” and “Pharaoh’s Dance,” the latter of which consumed the entire first side of the Bitches Brew double-LP.

In addition to the piano, Corea was an excellent drummer. At one point early in his career he more or less gave up the piano in favor of the drums because he grew tired of having to play on pianos that were in poor condition. That changed in 1967 when he got the gig with Stan Getz, whose stature afforded high caliber instruments. Chick was one of the musicians Wayne called upon for his 1969 album Super Nova, where Wayne asked him to play drums and marimba. Airto Moreira, who later played on Weather Report’s first album, was also on the Super Nova sessions.

“I got to the studio early and when I walked in there was a guy practicing drums and he was playing some incredible stuff,” Airto remembered. He asked producer Duke Pearson if it was Jack DeJohnette, who was also in the studio. “No, that’s Chick Corea,” Pearson replied. Having just arrived in New York from Brazil, Airto thought if the piano players in New York are this good on drums, imagine what the real drummers must be like! “I said, ’Oh my God, I’m going home!'” Airto recalled. “‘I left the studio and started walking down the street, but Flora [Purim, Airto’s wife] had come with me and she said, ’You have to go back and play.’ So I went back and did the session and it ended up being an incredible session with some beautiful music.”

At around the same time, Corea called upon Weather Report’s third co-founder Miroslav Vitous for his album Now He Sings, Now He Sobs, which is now considered an essential work in the jazz piano trio cannon. Miroslav’s participation came about from living at Walter Booker’s apartment in New York, where Corea came by to jam, along with many others. “I had just met Miroslav,” Corea remembered, “and we were doing some more free kind of stuff together, me and Miroslav.” As a result, Corea called him for the date.

Chick’s band Return to Forever was one of the jazz-rock heavyweights back when jazz-rock was the dominant force in jazz. For a handful of years RTF was right up there with Weather Report in terms of popularity, and the bands shared a handful of gigs in 1973 and 1974. At the earlier shows, Weather Report opened for Return to Forever. Bradie Speller, a percussionist who sat in with the band for a November 1973 gig in Ohio, remembers it being “a disaster.” Return to Forever “knocked the ball out of the park, and then we came on and Butch [Ishmael Wilburn] was playing so strong that he pushed a hole into the kick drum itself. Fortunately, Dom Um [Romão] had a drum set on stage and he jumped off the percussion and onto the drums. It was not the same, so we had trouble.”

By the fall of 1974, Mysterious Traveller had been released and Weather Report didn’t want to take second billing anymore. They abruptly pulled out of a concert in Lewiston, New York (near Buffalo), complaining that newspaper ads failed to give them equal billing to Return to Forever. According to Variety, the audience was told of the no-show just before showtime. Return to Forever played for an extra hour to make up for Weather Report’s absence, while about 100 of the 1200 attendees requested refunds. (A few days later Weather Report was listed first in ads for their joint Cleveland concert.)

In June of last year, Chick posted this photo on his Facebook page. It was taken in June 1984. 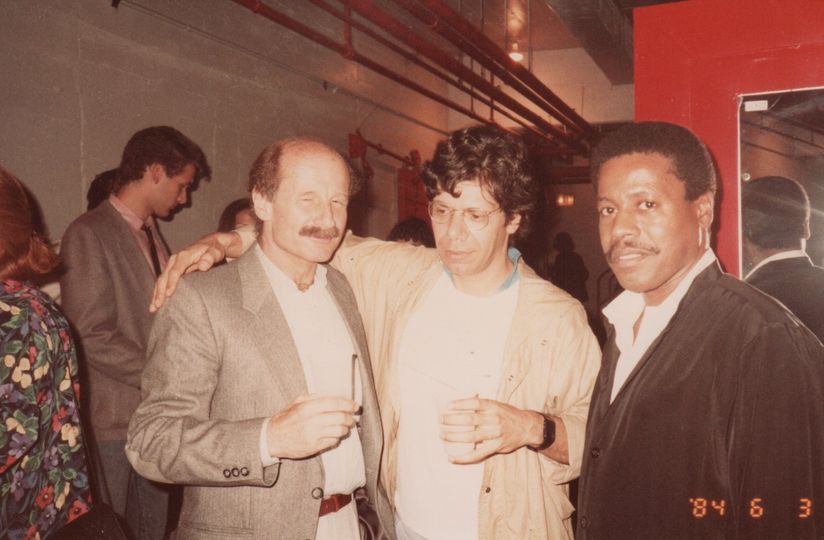 “Joe Zawinul—what a monster!” Chick wrote. “He was a mad scientist with the electric keyboards; he could really make them talk. And Wayne Shorter, my God–two of my heroes. They were co-leaders of Weather Report during the ‘Fusion Era’ in the 70s. Weather Report, Return to Forever and Mahavishnu Orchestra were 3 of the big touring groups at that time. Amazing musicians and great friends.”

Rest in peace, Chick. Thanks for all the great music.