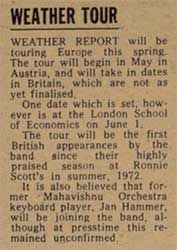 3 thoughts on “Could John McLaughlin Have Been a Charter Member of Weather Report?”