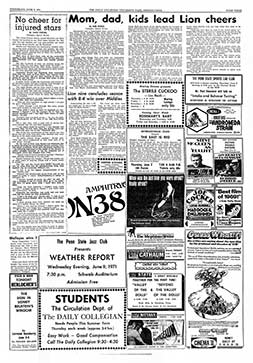 The Penn State performance was presented by the university’s jazz club and admission was free. At the time, the club numbered about 150 members. Joe later remembered there being about 170 people in attendance–so most of the jazz club and a few others. This would have also been the first time Dom Um Romão performed with Weather Report other than at a rehearsal shortly before this gig.

On the right is page 3 of the June 2, 1971, issue of the The Daily Collegian, which includes a display ad for Weather Report’s upcoming performance.

Performances On This Day (Nov 28)