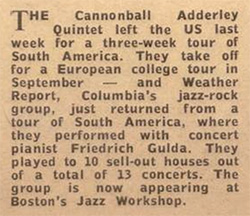 Melody Maker, July 8, 1972.
Right after the Gaslight Au Go Go gigs, Weather Report flew to Mexico City to start a thirteen-concert tour of Central and South America. The tour was a byproduct of Joe Zawinul’s longstanding friendship with pianist Friedrich Gulda, a fellow Austrian two years older than Joe who also hailed from Vienna. By this time, Gulda was an international star—a “demigod” in Joe’s words—and the headliner of the tour. Weather Report served as the opening act, after which Gulda performed classical pieces on solo piano. He and Joe also played a piano duet each night.

One indication of Gulda’s star power at the point was that he flew first class while Weather Report flew economy. But Weather Report benefited from Gulda’s ability to dictate a relaxed schedule. “For us it was a very comfortable tour because Gulda didn’t want to play every day,” Joe recalled to Gunther Baumann (here translated from German to English). “In Costa Rica, we stayed for a week. The strange thing was, Gulda was nowhere to be seen outside the concerts with us. That he flew first class and we flew economy was okay, but otherwise, he kept to himself. But of course I’m very grateful to him: Through this tour, we were one of the most popular bands in America. In 1978, we performed at the great Luna Park arena in Buenos Aires, all alone. The hall had 18,000 seats, and they still had to carry in extra chairs. That was one of the most popular—and best—concerts that we’ve ever played. When we wanted to drive an hour to the hotel after the concert, Wayne and I had to be carried over the people. Hundreds of fans waited at the exit for us.”

Wayne Shorter was particularly taken with what he saw and heard on this tour. According to an interview that appeared in Melody Maker later that year, Wayne talked at length about his experiences in Central and South America and claimed to have written a tune inspired by the Aztec pyramids. In Rio de Janeiro, the band cut short its own performance so they could hop in a waiting cab to go see the Brazilian singer/songwriter Milton Nascimento. “He’s digging deeper than Gilberto or Jobim or anyone into certain areas of life and sensibility,” Wayne said. “I heard some things there that made me feel reincarnated!” A few years later, Wayne would team up with Nascimento to record Native Dancer, the only album Shorter made under his own name during the Weather Report years.

Meanwhile, some concert attendees, expecting to hear an evening of classical music, were put off by Weather Report’s style of music. According to one report from Argentina, “The reception of this group was not too good, because the audience here is not much on the avant garde side of things.” That said, some listeners came away as inspired by Weather Report as the band members were by the likes of Nascimento.

Alyrio Lima remembered seeing the band in Rio de Janiero. “They were here in Brazil and I had to go and see them,” Lima told me years later. “My friend was the stage manager for the theater where they were performing, so I got a front row seat, which in fact was a backstage pass. It was a superb performance by the band, especially from Wayne and the drummer Eric Gravatt. That night I decided to go to New York and see how I would manage playing with musicians of that level of art in form of beauty. I was a rock-influenced drummer and initially my wish was to meet Jimi Hendrix and play with him. After the concert in Brazil, it was a turning point because I saw great masters, musicians praying with their playing, at ease with the newness of that magical musical moment, of the fusion.”

Lima subsequently came to the U.S. as a student at the prestigeous New England Conservatory of Music in Boston. While there, he was introduced to Weather Report’s manager, Bob Devere, who ultimately called him for the Tale Spinnin’ recording sessions and the tours that followed.