When I heard the news that synthesizer pioneer Dave Smith died on June 1, my mind wandered to the rendition of “In a Silent Way” that appears on Weather Report’s 1979 album 8:30. I heard it played live at the Terrace Theater in Long Beach, California. It was a beautiful performance, with Joe’s exquisite string patch backing Wayne’s soprano saxophone. That string sound came from Joe’s newly acquired Prophet-5 synthesizer, the instrument for which Smith is best know.

Smith’s path to the Prophet-5 began in 1972 when he purchased a Moog Minimoog. Utilizing his skills as an electrical and software engineer, Smith soon starting building accessories to the Minimoog for his personal use, one of which was an electronic music sequencer. Thinking he might be able to sell it to others, he founded a small company in 1974 that operated out of his apartment in Sunnyvale, California. He named it Sequential Circuits—a nod to his first product.

In 1977, Smith followed that up with the Model 700 Programmer, which could store the settings of an ARP 2600 or Minimoog. Joe bought two programmers, one for each of his 2600s. They greatly simplified the setup of his 2600s, allowing him to store 64 patches each, which could later be retrieved by pressing a few buttons, bypassing the laborious process of reconfiguring the sliders on the 2600s’ front panels.

Between the sequencer and the programmer, Smith did well enough to quit his day job and move operations from his apartment to a nearby industrial complex in the heart of Silicon Valley. Meanwhile, the microprocessor revolution had just begun. The first commercially successful personal computer, the MITS Altair 8800, hit the market in January 1975, while the Apple II was released in June 1977.

Smith was well-acquainted with this technology, and he harbored ideas of building a synthesizer around it. But the advantages of doing so were so clear to him that he figured the established synth manufacturers—Moog and ARP—must have already been working on it, so he was inclined to stick with accessory devices. However, when Smith attended his first NAMM show in June 1977, visitor after visitor to his booth suggested that he combine his sequencer and programmer with a synthesizer. On the flight back home, he thought about it some more and had a change of heart.

Smith got together with a musician and clinician named John Bowen, and together they worked out the design for a five-voice polyphonic synthesizer. It would have a sound architecture similar to a Minimoog, but the front panel knobs would control the settings for all of the voices simultaneously. More crucially, digital technology made it straightforward to save all of the synthesizer settings in computer memory, allowing the instrument to have a large bank of programs or patches, each of which could be recalled instantly. At the time, no one else had a synthesizer that could do that. In July 1977, Smith went to work on the project in earnest. His goal was to show his synthesizer to the public six months later.

Smith toiled in secret, but as the winter NAMM show approached, word got around that he had a polyphonic synthesizer. On the first morning of the show, representatives from Moog, Oberheim, and ARP all gathered at Sequential’s booth to have a look, but there was no synthesizer to be found. That’s because the one and only prototype was still in the San Francisco Bay Area, where Smith was working feverishly to get it to the point where it could be demoed.

After pulling an all-nighter, he took the one-hour flight down to Southern California, ambled into Sequential Circuit’s booth at around noon and set up the synth, now named the Prophet-5. “It mostly worked, most of the time,” Smith recalled. “It would crash once in a while and we’d have to restart it. But it was certainly operational enough to blow everybody away.” 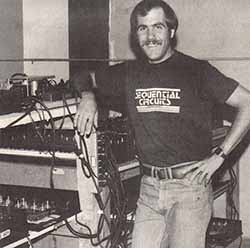 Dave Smith at the Sequential Circuits factory in 1978. Photo: Sequential.
The Prophet-5 was a milestone in the evolution of synthesizers. As the first with an embedded microprocessor, its technology leapfrogged the competition. More critically, it gave musicians what they wanted: A polyphonic, fully programmable synthesizer that sounded fantastic. If you were serious about playing keyboards, you had to have one, even if you couldn’t afford the $3,995 price tag. Sequential Circuits came away from the show with orders for 400 units.

Right after Smith got back to the Bay Area, Joe’s keyboard technician, Alan Howarth, heard about “this Prophet-5 thing” from his music store friends back in his hometown of Cleveland, so he put in a call to Sequential’s Sunnyvale office. “Man, I heard you were at the NAMM show and you had something amazing,” Howarth said, asking if he could come up and have a look. “And I went up and visited Dave Smith in his little shop. The Prophet-5 from the NAMM show was sitting on the table. I took one look at it and said, ‘We gotta have it.’”

Inventing the Prophet-5 would have been enough to secure Dave Smith’s place in the pantheon of synthesizer pioneers, but his most far-reaching achievement was spearheading the MIDI (Musical Instrument Digital Interface) standard so that instruments from different manufacturers could communicate with each other. It was demonstrated at the January 1983 NAMM show, when keyboards from Roland and Sequential Circuits were connected via a cable and played each other’s sounds. Up to that point, the various synth makers each developed their own schemes for connecting their devices, but no standard existed for general interoperability.

Despite some grumbling from the various manufacturers who were naturally invested in their own technologies, MIDI quickly established itself, and virtually all keyboards released from 1983 on were MIDI-equipped. Soon, personal computers also came with MIDI interfaces, leading to a wave of new software and hardware products that changed the face of music production. In recognition of his efforts, Smith is now known as “the father of MIDI.”

Dave continued to design and implement innovative musical instruments throughout his life, most recently at his company Sequential, which sells a modernized version of the Prophet-5 and Prophet-10 synthesizers. Joe wound up acquiring three Prophet-5s, as well as a successor model, the Prophet-T8, which he continued using right up to his last concert in 2007, 24 years after the instrument was manufactured! (Look for the Prophet-T8 logo at around the 3:32 mark in this video.)

Wayne and Jaco got their own Prophet-5s, too. In fact, Jaco’s second wife Ingrid remembered how Jaco used it to compose his most enduring composition, “Three Views of a Secret.” “He had recently moved into my tiny apartment, and it was the newly acquired Prophet 5 that helped him evolve the tune,” she said.

Not many people can lay claim to changing music. Dave Smith did. Rest in peace.