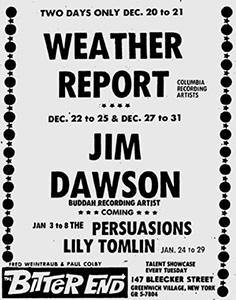 Village Voice advertisement for Weather Report's performances.
Fifty years ago today, Weather Report opened a two-night stand at the Bitter End in Greenwich Village. The club seated 230 people and according to contemporaneous reports, it was packed for Weather Report’s performances. The band had been working steadily throughout 1972, thanks to the booking efforts of Bob Devere, who took over Weather Report’s management early in the year. Many of these gigs were multi-day engagements at clubs, often for a week at a time.

What makes the Bitter End gigs notable is that according to Brian Risner this was Joe Zawinul’s first public performance with a synthesizer. Joe had owned his ARP 2600 for over a year—actually it was given to him by ARP “for evaluation”—but he regarded it as too fragile to travel with. However, given that the band was performing in town, Risner suggested that they bring it down to the club. Joe was reluctant at first, but Risner won him over, taking the synth to the Bitter End by taxi, wrapped in a blanket to avoid potential damage.

Dan Nooger reviewed the first night’s show for the Village Voice. “The atmosphere recalled a concert hall or art gallery on opening night,” he wrote.

I last saw the group a little over a year ago at the Beacon, when drummer Eric Gravatt and percussionist Dom Um Romáo had just joined. Their music then seemed rather formless, consisting mostly of undirected riffing, with only occasional sax or electric piano lines breaking through to the surface of the percussion-dominated sound.

Although their first number recalled the aimlessness of their earlier appearance, the rest of their material, drawn from their latest album I Sing the Body Electric, gave each musician sufficient solo space to construct cohesive statements. “Crystal,” which featured Josef Zawinul on synthesizer, was built around repeated cycles of ascending arpeggios, recalling Terry Riley’s experiments in the area of “trance music.” The high, keening sounds, offset by Romáo’s percussive effects, established a pervasively mysterioso atmosphere for a graceful, leaping tenor solo by Wayne Shorter that developed into a free-blowing conversation among all the players.

Nooger’s description of “cycles of ascending arpeggios” likely referred to the sample and hold feature of the 2600, which could automatically create repeating sequences of ascending or descending notes, or rapidly triggered random tones, depending on how it was configured. In surviving unofficial recordings from 1973, Joe can be heard using this feature, changing the 2600’s configuration as the notes played in order to vary the sound. Of course, Joe would add his own playing to the mix, as well as those of the other musicians, to create highly improvisational performances.

Nooger offered other insights about Weather Report’s performance that night:

Romáo garnered cheers from the crowd when he made the group’s only concession to theatricality (or perhaps simply our presence) by dancing down the center aisle while playing a metal-strong bow with an exotic gourd rattle. At the conclusion of the set, after the other men had filed offstage, Gravatt announced the band members—the first words spoken by any of the group—and that was that. Their music was mostly excellent, but their utter disdain for their obviously devoted listeners was a trifle disconcerting, though it didn’t seem to bother most of them.

Nooger was describing Romáo playing the berimbau, an instrument from Brazil that was little known in the United States at the time. In fact, it is said that Romáo was the first person to play a berimbau in public performance in the United States when he was with Sérgio Mendes’s Brasil ’66.

Nooger’s observation that no words were spoken other than Gravatt’s band introductions remained true of virtually all of Weather Report’s performances. After Gravatt left the band in June 1973, Wayne Shorter took over the introduction duties.

Nooger’s other observation—that the band seemed to hold “utter disdain” for their audience—wasn’t true, but it was a perception other reviewers hit upon as well. Earlier in the year, Don Heckman of the New York Times attended Weather Report’s performance at the Gaslight Au Go Go, writing that while the music was “magnificently executed,” he “couldn’t help but feel that it was more enjoyable to the musicians than to the listeners.”

These were sentiments that likely wouldn’t have sat well with Zawinul. As he would say a few years later, “For me, happiness has something to do with getting across to people.” Less than two months after the Bitter End gigs, Weather Report would record its third album, Sweetnighter, which would be an attempt to do just that.

As for the Bitter End, it’s still in business at its original location, 147 Bleecker Street, where a virtual who’s who of the music world has performed. The heavy wooden doors that have served as the club’s entrance since 1961 are now adorned with a plaque from by the City of New York proclaiming the Bitter End as an official historic landmark.