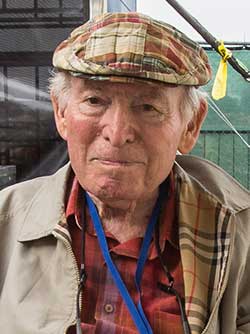 George Wein in 2014. Credit: digboston, CC BY 2.0 via Wikimedia Commons.
George Wein, the legendary impresario who virtually invented the concept of the contemporary music festival, died on September 13. He was 95 years old. According to his obituary in the Washington Post, Wein “may have presented more musicians to more people than anyone else in history. He launched the Newport Jazz Festival in 1954, the folk festival in 1959 and later developed the New Orleans Jazz and Heritage Festival, the Playboy Jazz Festival in Los Angeles, and dozens of others across Europe, Asia and North America.”

Joe and Wayne performed at many Wein productions over the years. Weather Report’s first time at Newport was to be in 1971, but that appearance was canceled in the wake of a riot the previous night. Later that year, Weather Report participated in a concert in Boston to benefit Wein, who suffered significant financial losses because of the festival’s cancelation. When the festival was moved to New York City the following year, Weather Report took part, as it did in 1973.

Wein inaugurated the Playboy Jazz Festival in 1979, where Weather Report was the headliner. When the band returned in 1981, it put on a stellar performance that prompted journalist Leonard Feather to call them “the unquestioned crowd killers of the festival.” Wein booked Weather Report for yet another appearance in 1982. Given their strong showing the previous year, Wein asked Joe if the band could do “something special”—something that could top the previous year’s gig. He suggested a guest musician, which led to Zawinul inviting the Manhattan Transfer to perform “Birdland” with Weather Report—a surprise, unannounced encore that brought down the house.

Aside from appearances at Wein’s festivals, there are a couple of stories that involve Wein and Zawinul that are of interest. It is well-known that Joe came to the United States in 1959 thanks to a partial scholarship to the Berklee School of Music. Less well-known is that Wein almost brought Zawinul to the States in 1958 as part of the International Youth Band, which Wein organized with Marshall Brown for a performance at the Newport Jazz Festival. As Wein describes in his autobiography, Myself Among Others, he and Brown were intent on including musicians from across Europe, but finding one from Switzerland proved difficult.

“We could find no suitable musicians in Switzerland, one of our target countries,” Wein wrote. “Fortunately, we did find a good Swiss pianist by the name of George Gruntz—in Milan. Our problem seemed to have been solved, but another arose when we discovered a more desirable pianist in Austria, a young man by the name of Josef Zawinul. What could we do? There were a number of good musicians in Austria, but only one capable player from Switzerland. And so it was that we chose George Gruntz over Joey Zawinul for the International Youth Band.”

The other story takes place shortly after Joe arrived at the Berklee School of Music in January 1959. Joe was older and quite a bit more experienced than most of the Berklee students, and he found the curriculum to be well-beneath his abilities. However, there was an advantage in being the best piano student in school. Wein owned and operated the Storyville jazz club, located not far from Berklee in Boston. About two weeks into the semester, Ella Fitzgerald was scheduled to appear there. The pianist for the house band was ill that night, so Wein called Berklee for a substitute. Ray Santisi, a legendary piano teacher at the school, sent Joe. He impressed the drummer, Jake Hanna, who called his former employer, trumpet player and bandleader Maynard Ferguson, whose pianist was going into the Army. On Hanna’s recommendation, Joe to auditioned with the Ferguson band the next day. The rest, as they say, is history.