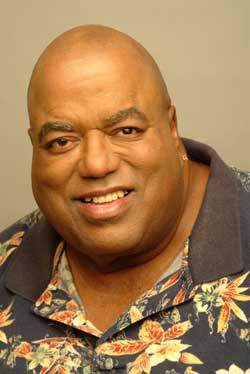 I recently interviewed Herschel Dwellingham, one of the drummers who performed on Weather Report’s third album, Sweetnighter. I’ll be updating that page soon, but in the meantime, here’s some background about Herschel himself.

Weather Report fans who know him solely from his work on Sweetnighter may not know that in the sixties and early seventies, Herschel was quite active in the soul and R&B scene in the Boston area, having arrived there in 1963 to attend the Berklee School of Music after graduating from high school in Bogalusa, Louisiana. By the time Weather Report came calling, he was a much-in-demand session drummer, and would soon move to New York to work with top-notch arranger-producers such as Phil Medley (writer of “Twist & Shout” and “One In A Million”), Bert Keyes (Stephanie Mills), Paul Leka (Harry Chapin), and Bert De Coteaux (Sister Sledge and the Manhattans). He and his wife also started their own production company, Helva Records.

One of the earliest tunes Herschel produced in Boston was “Young Girl,” sung by little known Frank Lynch. A few years ago, contemporary R&B artist and Boston native Eli “Paperboy” Reed told the story of “Young Girl” in a post on The Southern Soul List Yahoo group:

[Herschel] became THE arranger, producer and session drummer for basically all the R&B and soul records that came out in Boston between 1963 and 1973. He also was the band leader and drummer at the biggest and best Boston soul club at the time, The Sugar Shack, in addition to writing and arranging commercial jingles at Ace Recording Studios in Boston’s famed combat zone.

Herschel really transformed the soul scene in Boston by combining the southern sound he had gotten growing up in Bogalusa (about 70 miles north of New Orleans) with the formal training he received at Berklee. In fact, the first record he produced in Boston was a cover of a big New Orleans hit, “Kiss Tomorrow Goodbye,” which had been recorded by singer Danny White. Herschel’s version is a great example of that combination of styles and was sung brilliantly by Billy Thompson, and arranged by Herschel’s friend from Berklee, Alf Clausen, who later went on to garner much fame for arranging and writing for The Simpsons television show! 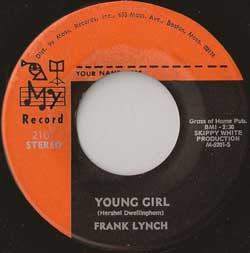 “Young Girl” was recorded in late 1967 and was the second record Herschel ever produced, after the Billy Thompson record. He and the singer, Frank Lynch, had known each other for a few years and after a local DJ failed to follow up on a promise to record Lynch, Herschel decided he would produce him himself. He wrote the song “Young Girl” along with the b-side of the single “People Will Make You Say Things.” This time Herschel did the horn and string arrangements himself, in addition to producing and playing drums. His friend Alf Clausen was involved again, playing the distinctive french horn part on the session! Herschel recorded the song on his own dime and then brought it out on his label, My Records, which he co-owned with his wife, Alva, and Boston area record store impresario Skippy White.

As soon as the record came out in 1968 it was given pick hits by Billboard, Cashbox, and several other trade magazines. “Young Girl” was on its way to taking off before fate intervened. On a Friday night, Frank Lynch was playing with Herschel and his band at the famous Boston club, Paul’s Mall. At the time, Lynch was living with his aunt, with whom he had recently moved in with after living with Herschel and his wife for almost two years. After the gig, Herschel was driving Frank home and said that he was acting “funny” and kept talking about death and about how he knew he was going to die.

That night, Lynch got into an argument with his aunt which escalated into a physical fight. A neighbor called the police who, in the process of arresting Frank, broke his arm. He was taken, along with another prison, to Mass. General Hospital and an armed police officer was stationed there to guard both prisoners. Apparently Frank was still in an odd state because when he came out of the bathroom he started waving a towel at the police officer in a threatening manner. The other prisoner decided to join in and they both advanced toward the officer. The cop shot Frank three times in the head at close range, killing him instantly.

After that night, there was an uproar in Boston’s black community. Frank Lynch’s family sued the city of Boston along with the Boston Police force, but their case was unsuccessful. Boston was still a very racially divided city in 1968 and no one was surprised by the verdict.

Fast forward 40-some years and “Young Girl” was re-discovered by Eli Reed. As Herschel tells it, “Eli found it on the floor of Skippy’s record shop after Skippy had moved out. He took it home and got interested in me and the song. When he got a deal with Capital Records, he told what made the deal go was that they loved the song, and he re-recorded it. He copied my arrangement for Frank Lynch just the way I did it originally. And I just got an email from a music supervisor that it’s going into a new movie, [Kevin Costner’s] Black and White.”

Nowadays, Herschel’s back home in Bogalusa, running his current record company, Bogue Magic City Records. “We started it in 2004,” Herschel recently told me. “I’m an owner. Mary Starr, with whom I’m married to now, is one of the owners. And the singer Marlena, who was Molly Holt from the Rascals, is one of the owners. Right now we’ve got something like 50 releases and 30-some artists. We’re an Internet record label and we’ve been doing pretty well.”

Sweetnighter has had a lasting impact on Dwellingham. “I go to places around the country and they say ‘Herschel Dwellingham’… Even in L.A.… I played the Whisky A Go-Go and people must have known I was going to be there. A lot of drummers were there. Drummers come out wherever I go. That one little album [Sweetnighter] must have put me on the map. Even in Europe. I was in Frankfort and I did master classes and private teaching. It was just unbelievable. My wife and my friends say I really don’t realize what I did and how important to drumming my playing was. I’m just a country boy who doesn’t think nothing about that. To me, I was just trying to make money to feed a wife and three little kids. That’s what I was doing. I didn’t think I was making history or fame or anything. Just trying to keep money in the house.

“When Zawinul was in town at the Blue Note, I was playing somewhere else on the same night, so I couldn’t get there. So I called and asked for him. They said he’s on stage, call back in ten minutes. I called back and said, ‘Tell Joe Zawinul that Herschel Dwellingham is on the phone.’ I thought, this guy isn’t going to remember who the hell I am. But he came to the phone and said, ‘The Boogie Woogie Waltz man!’ I said, ‘You remember me?’ He said, ‘Man, are you kidding?! There wouldn’t be no Weather Report if it wasn’t for you.’ That’s what he called me, The Boogie Woogie Waltz Man. We talked and we were trying for me to come to L.A. and do another album with him, and then he got sick.” 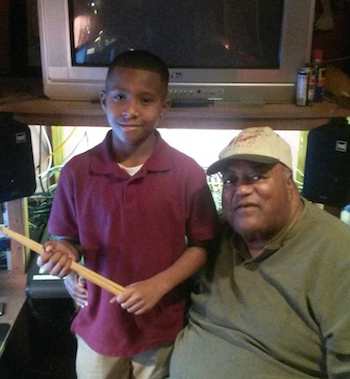 Herschel keeps busy producing a variety of artists from his Bogalusa office and studio. “We have a young girl named Annie Gambino that Marlena and I have been writing and producing for. I’ve got a new Tony Williams, he’s nine years old. His name is DJ; I call him DJ the drummer. I just started teaching him the [Berklee percussion teacher] Alan Dawson system. He’s got a good groove, his tempo is solid, he doesn’t speed up or anything, and he’s going to be a great drummer.” For Herschel, it’s a part of passing down the tradition. “As a kid, I used to watch the great Earl Palmer, and that’s how I got interested in being a drummer. Earl gave me a set of sticks, and I just gave another little guy that I’m teaching a set of sticks. When I go places and I see young people who are enthused and want to play, I keep a bunch of brand new sticks that I give them.

“The latest artist I produced is a 16-year old girl, Marce, who’s going to be another Whitney Houston. She’s dynamite–got the chops and everything. We recently did a Christmas song for her that Marlena and I wrote it, and we put it out on iTunes and all the Internet stores. Early this year there will be a new release from Marlena, a new album by Timothy Wilson, and another song from Marce.

“I also have my own album, Enlightenment. I play all the instruments and Marlena sings. Everything on it is me. And there’s a song called ‘I Thank You Joe’ dedicated to Joe Zawinul. It’s what I think Joe’s style is.

“I’ve got a growing production company and record company, and we’re busy producing and writing,” Herschel concludes. It sounds like life is good for the Boogie Woogie Waltz Man.

3 thoughts on “Catching Up With Herschel Dwellingham”