The second public performance of Weather Report that I know about took place at the Third International Music Forum, held in the lakeside resort town of Ossiach, Austria. The exact date isn’t clear, for reasons that I will explain below. But first, a bit about the festival itself. 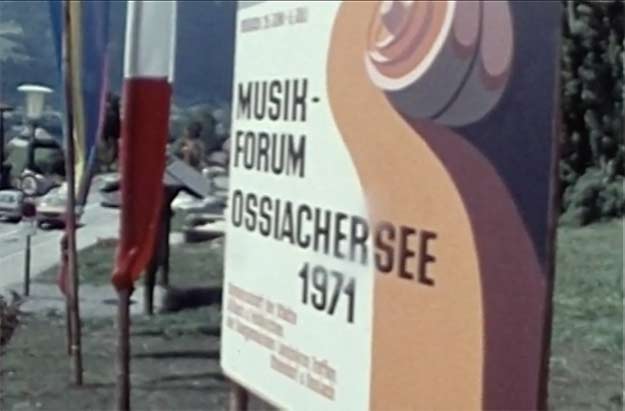 The “3. Internationales Musikforum Ossiachersee 1971,” as it was titled in German, was organized by Friedrich Gulda, a world class concert pianist with broad musical interests, and a friend of Joe’s going back to the early 1950s. Two years older than Zawinul, Gulda was also born in Vienna, and came to prominence by winning the prestigious Geneva International Music Competition in 1946 at the age of 16. Gulda made his United States concert debut at Carnegie Hall in 1950. While there, he found time to pursue his interest in jazz, visiting the clubs in New York and bringing jazz records back to Austria. For jazz musicians in Austria, Gulda’s tales about what he saw in New York, and the records he came home with, served as a lifeline to the jazz world at large, and reinforced the almost mythological standing of the jazz club Birdland to his fellow countrymen.

Gulda had organized the first two music forums in 1968 and 1969 (there was no event in 1970), and for the third festival he envisioned a significant gathering on an international scale, spanning eleven days, and presenting all kinds of music, including classical, exotic, folklore, pop, jazz, and electronic music. Some referred to it as the “Woodstock of Carinthia.” Among the headliners were Pink Floyd, Tangerine Dream, Weather Report, and Gulda himself.

Not everyone was happy with Gulda’s ambitions. The large crowds the festival attracted so overwhelmed the bucolic village of Ossiach (population approximately 500) that it wasn’t invited back. At one point Gulda was confronted in a local tavern and called an asshole to his face—something he later laughed off to the assembled press.

The exact date of Weather Report’s Ossiach performance remains a mystery to me. You can find unofficial recordings on the Internet that claim the date was July 27, but the festival took place from June 25 through July 5, so July 27 can’t be right. That led me to speculate that maybe the date was off by a month, making it June 27, which would fit within the festival’s schedule.

However, I have a partial reproduction of the festival program, which was originally posted as part of a piece about Pink Floyd’s performances in Austria (of which there were six over the years). Only the program pages pertaining to Pink Floyd were posted, including a page showing the festival calendar for June 25 to July 1. The next page, which would have described the remaining days, wasn’t posted. (We were so close to unraveling this mystery!) Based on this, we see that Weather Report wasn’t listed on any performances through July 1. So either Weather Report wasn’t included in the program (unlikely, though maybe it was a late addition), or it would have performed after July 1. 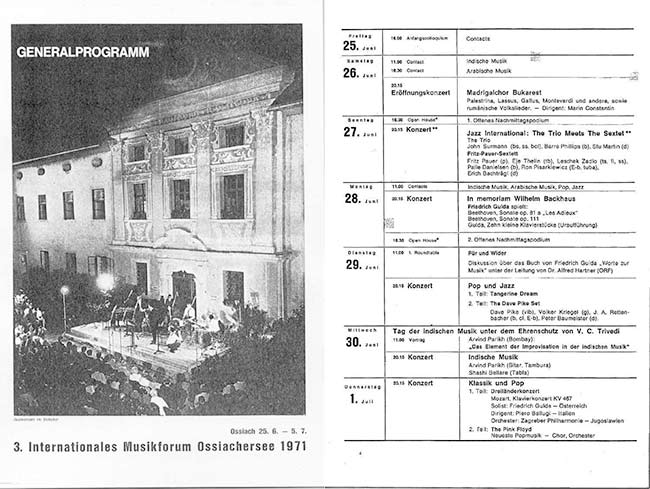 We also know that Weather Report was scheduled to perform at the Newport Jazz Festival in Rhode Island on the afternoon of July 5. To make that date, the band would have had to fly back to the United States no later than July 4, implying that Weather Report performed at Ossiach on July 2 or July 3. Furthermore, Ossiach is about a four-hour drive from Vienna, where the nearest international airport is located, so it seems likely that Weather Report performed on July 2, traveled to Vienna on July 3, and flew back to the United States later that day or on July 4. I hate unresolved questions like this, so if anyone out there has more definitive information, let me know!

Despite the uncertainty of the date of Weather Report’s gig, we do know they were there because there is surviving video of the band at Ossiach. In the video below, Weather Report makes an appearance at the 1:34 mark, where you see all of the band members setting up for their concert. Later, at 2:20, we see them in action.

Another snippet of video can be found at YouTube (with Gulda nodding along):

It seems likely that Weather Report could have played other dates while in Europe, perhaps at clubs, but no information to that effect has surfaced. We know that Weather Report performed at Penn State University on June 9 (according to Zawinul, this was in fact the band’s first public performance), so there would have been time for Weather Report to do some gigs in Europe leading up to the Music Forum.

Weather Report would make another trip to Europe in 1971, late summer. More about that later.